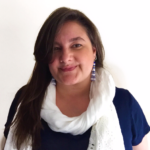 Aylan Couchie is an interdisciplinary Anishinaabe artist and writer hailing from Nipissing (Nbisiing) First Nation in Northern Ontario. Though now based in Toronto, she received her BFA with a major in sculpture from NSCAD University in Halifax, Nova Scotia. She is currently an MFA Candidate in the Interdisciplinary Art, Media and Design program at OCAD University where she is pursuing her graduate studies with a focus on Indigenous monument and public art. Her work explores ideas of colonialism, land and First Nation realities and histories from her Two­-Spirit, feminist perspective. While serving as director of marketing for The Front Room Gallery, she initiated and lead Barrie’s “Who New?!” Downtown Art Crawls as well as several other events in partnership with local organizations. She’s community­ driven and asserts an Indigenous presence on arts advisory committees and juries. She’s been the recipient of several awards including “Outstanding Student Achievement in Contemporary Sculpture” through the International Sculpture Center and the Inaugural Barbara Laronde Award from Native Women in the Arts. Most recently, Aylan won a Premier’s Award through Ontario Colleges which allowed her to create and establish a 5 year scholarship in support of single Indigenous mothers excelling in a post­-secondary program at Georgian College.