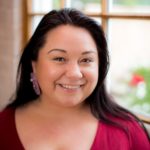 Ariel Smith is an award winning nêhiyaw and Jewish filmmaker, video artist, writer, and cultural worker. Having created independent media art since 2001, much of her work has shown at festivals and galleries across Canada and internationally Ariel is largely self-taught, but honed many of her skills by becoming heavily involved in artist-run centres in Vancouver, Montreal, Toronto and Ottawa. Her passion for artist-run culture has become an integral part of her practice.

Ariel has over a decade of experience in arts administration and management. She has worked as the Technical Director of SAW Video Media Arts Centre in Ottawa Ontario from 2006 to 2014, was the Director of the National Indigenous Media Arts Coalition from 2013 to 2016 and, most recently, was the Executive Director of imagineNATIVE Film + Media Arts Festival where she oversaw the 2016 and 2017 festival editions.

Ariel has worked as a programmer for such organizations as Galerie SAW Gallery, the Ottawa International Animation Festival, Reel Canada, and imagineNATIVE. She is currently a guest curator for an upcoming International Indigenous Quinquennial exhibition at the National Gallery of Canada.